We are disappointed that members of the Department of Theological Studies continue to act in contradiction to the teachings of the Catholic Church. Not only do they penalize students for calling God Father, not only do they push gender theory via pronoun policing, but now they have an upcoming event on April 7th, 2022 promoting women’s ordination.

The advertising for the event (see below) claims that Diane Smith Whalen is a “Roman Catholic Woman Priest.” In fact, Diane Smith Whalen’s claim to be a Roman Catholic priest has as much validity as the claim of David Allen Bawden who styles himself Pope Michael to be the current Roman Pontiff. He isn’t the pope, and she isn’t a priest.

The Church does not “forbid” women’s ordination as if it were banning bingo in the parish hall during Lent. Rather, as Pope St. John Paul II pointed out, the Church teaches that she is not authorized to admit women to priestly ordination because the sacraments were instituted by Jesus himself. No pope can authorize baptism with sand, the holy Eucharist with sausage, or the ordination to priesthood with females. The advertisement for this event suggests a “priesthood redefined” away from fidelity to what Christ established. Jesus, although he regularly broke with Jewish custom, retained the distinctively Jewish male priesthood unlike the pagan religions of the time which had female priests.

We want events that support rather than tear down the Church. We want a theology of faith rather than an ideology of secularism. We want LMU to be institutionally committed to Roman Catholicism rather than to radical feminism. 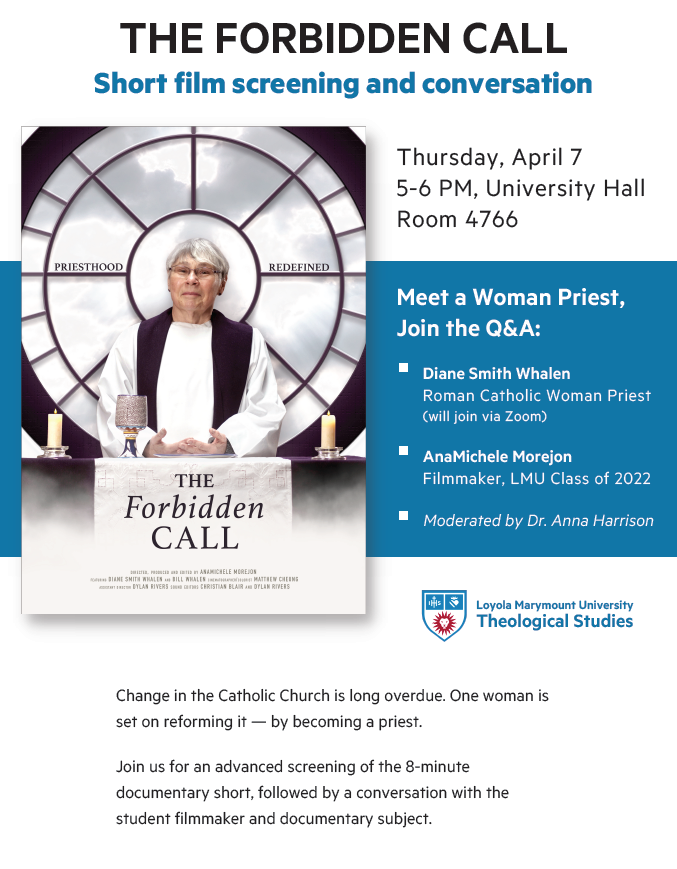 LMU has announced the death of another beloved Jesuit professor:

Father Rolfs joined Loyola University in 1968 as an instructor in political science. He became an assistant professor of European history in 1974, an associate professor in 1980, and was promoted to the rank of professor in 1997. Father Rolfs retired in 2005 and was awarded emeritus status, continuing to teach in a part-time capacity until 2012. An esteemed scholar, Father Rolfs was an expert on the history of Germany’s Third Reich, the Holocaust, and the roots of anti-Semitism.

His legacy is reflected in the generations of students and colleagues he impacted throughout his service to LMU. Father Rolfs was dean of students from 1964-70, president of the Academic Assembly from 1978-79, and chair of the Department of History from 1978-86. He also served as a trustee from 1978-86, where he was a member of the Executive Committee, the Facilities and Long-Range Planning Committee, the Committee for Academic Affairs, and the Student Affairs Committee.

We thank God for the gift of Fr. Rolfs, for his teaching so many generations of LMU students, and for his faithful ministry as a priest. May his soul and the souls of all the faithful departed, through the mercy of God, rest in peace.