In the summer of 2020, after statues were taken down across the United States, your administration approved the removal of the statue of St. Junípero Serra that stood in the front of the Charles Von der Ahe Building, the former library.  We object to your action.

It is hard to believe that the statue was taken down in order to be repaired. An identical statue, also donated in 1992 by one of our greatest donors William Hannon, can be found in very good condition at St. Anastasia School, just one mile away from LMU. In any case, any repairs should be complete by now, a year and a half later. Nor was LMU’s statue taken down in order to prevent likely vandalism. Due to Covid, almost no one was allowed on campus until Fall 2021.

These symbols matter, and they are dearly treasured by the Catholic faithful. Moreover, as the essay, “Is Loyola Marymount University Losing its Catholic Identity?,” predicted,  “The final argument about religious identity will be about whether distinctively religious art should remain. A compromise will be struck whereby the pieces considered offensive—such as the central crucifix and the statue of Mary—are removed, but the stained glass windows remain intact, a silent reminder of a long lost tradition.” Your choice to remove this statue was one more step you have made towards LMU losing its distinctive identity and becoming just like any secular school.

With all due respect to some on campus who see things differently, the statue of St. Junípero Serra should be returned to a place of honor. The saint’s statue should be accompanied by exactly the same contextualization, historical perspective, and critical evaluation that accompanies all the other statues, plaques, memorials, and quotations in stone on campus from figures including Winston Churchill, Martin Luther King, Jr, Mahatma Gandhi, Bill Gates, St. Ignatius of Loyola, and the Virgin Mary. That is to say, none. For these figures, we do not publicly document their real or alleged sins, or the sins of those associated with them, near their sites of commemoration.

This consistent policy in how we treat statues on campus is particularly appropriate for St. Junípero Serra who recently completed the lengthy and rigorous examination process involved in becoming a canonized saint. In the words of Pope Francis, St. Junípero, “sought to defend the dignity of the native community, to protect it from those who had mistreated and abused it.” As Archbishop José Gomez of Los Angeles and Archbishop Salvatore Cordileone of San Francisco point out, St. Junípero “defended indigenous people’s humanity, decried the abuse of indigenous women, and argued against imposing the death penalty on natives who had burned down a mission and murdered one of his friends. At age 60, ill and with a chronically sore leg, Serra traveled 2,000 miles to Mexico City to demand that authorities adopt a native bill of rights he had written.”

Regardless of what any committee may recommend to you, we hope your decision about this statue does not further erode our Catholic identity. If a Planned Parenthood fundraiser can be held at LMU in Roski, certainly a statue of this country’s first Hispanic saint canonized by the first Hispanic Pope can be in a place of honor and respect at LMU. If you wish to have the statue placed inside, so as to lessen the likelihood of vandalism, it should be in a place of high visibility as it was before. We suggest putting it in Roski. 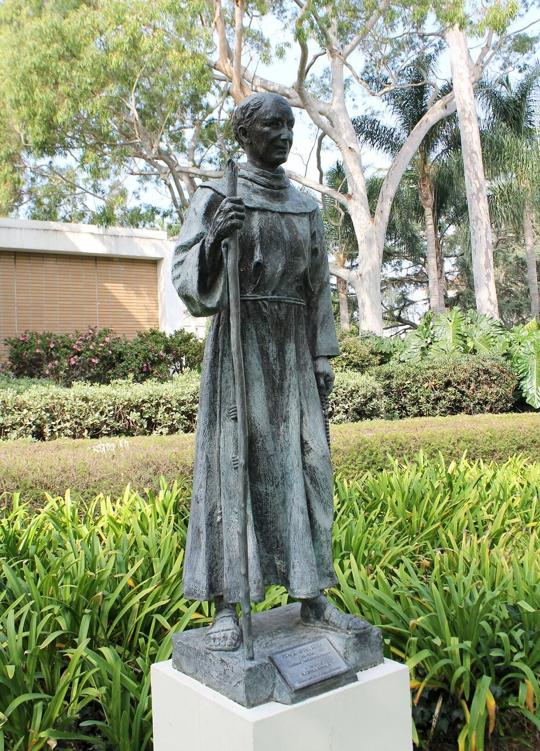